La Llosa, our most international and enjoyable dive. It simply must be dived...

La Llosa is located about 300 m south of the island. Its highest part is 6 m from the surface, while its base is at over 30m. Its environmental luminosity and hydrodynamics create a habitat of singular importance. It is frequented by predatory species such as the greater amberjack (Seriola dumerili),the Mediterranean barracuda (Sphyaena sphyaena),and the common dentex (Dentex dentex) that hunt Boops, (Boops boops) their main food along with other small fish. It's also an important refuge for more sedentary species, such as moray eels, octopus, different types of bream, etc. Its flora is represented by various species of infralitoral photophilic algae. 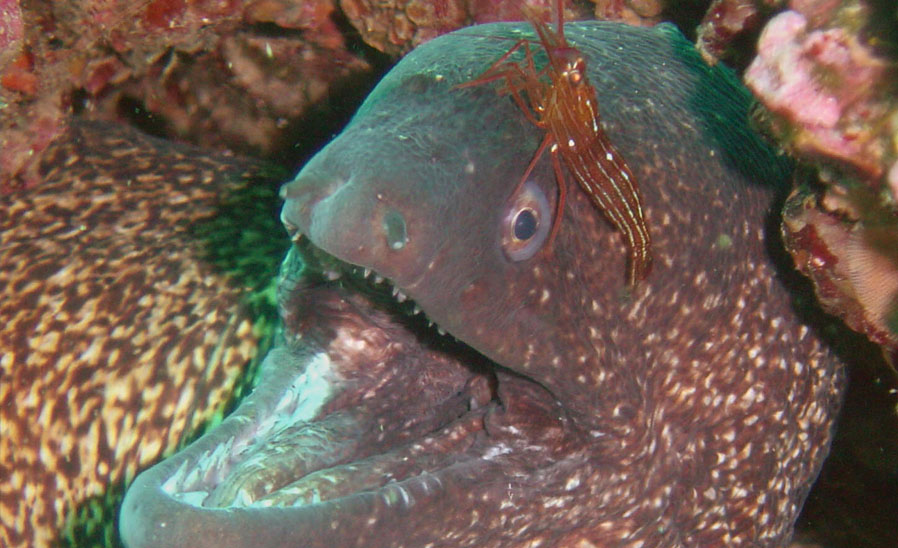 We'll find this type of landscape in most of our dives at their first 30 metres depth. The organisms that develop here belong to the quiet infralitoral photophilic (light lover) algae community. Here these photophilic communities develop, with the clear dominance of the algae species. At the base of the island's vertical walls (especially at the north and east sides) and on the east side of La Llosa, the sea bed is dotted with numerous large rocks, many of them from landslides. At a first glance, we can only see a great many diverse fish, but after carefully observing the seabed, we'll distinguish a multitude of invertebrate species hidden among the nooks and crannies of the substrate, the main characters of the landscape. On the underside of these large loose rocks lives an animal community (an infralipidicola community), consisting of bryozoans, ascidians, sponges, polychaetes, etc, whose diversity increases the further they get away from the hydrodynamism and bury themself into a deeper site.